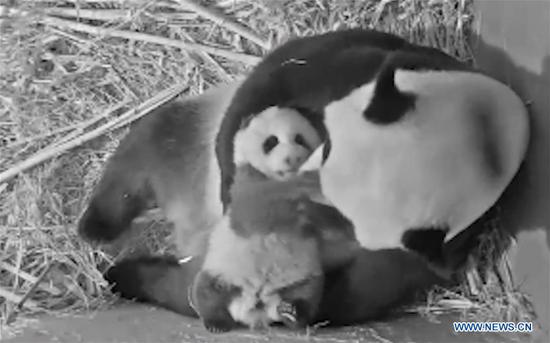 The giant panda cub born in the Dutch Ouwehands Zoo has been named Fan Xing, the zoo in Rhenen, central Netherlands, announced on Friday.

The cub was born on May 1 this year. Over 22,000 votes were cast worldwide and Fan Xing became the close winner. He Kang, He Shun, Dan Qing and Xing He were the other options, according to the zoo.

"Fan is the abbreviation for Fan Gao, which refers to Van Gogh in Chinese," Ouwehands Zoo said in a statement.

"Van Gogh is among the most well-known Dutch artists in China, so the word Fan could be seen as a connection to the Netherlands. Xing is from the cub's father Xing Ya. Xing means star in Chinese, which symbolizes hope and the right direction."

"The birth of the panda cub symbolizes the friendship between China and the Netherlands... With the panda cub, we also have a new 'ambassador' for both peoples," Chen Ribiao, Minister Counselor of the Chinese Embassy to the Netherlands, said at a name announcement ceremony.

"The arrival of this panda cub will encourage us to continue to push for biodiversity and the protection of wild species, including giant pandas," said Chen.

The giant panda is an endangered species that is only found in the wild in China. An international breeding program was established to protect the species and the pandas in the Ouwehands Zoo are part of this program.

The cub's parents, father Xing Ya and mother Wu Wen, arrived at Ouwehands Zoo on April 12, 2017. According to the arrangement with China, newborn Fan Xing can stay in the Netherlands for four years. After that, it will go back to China to continue to contribute to the breeding program.